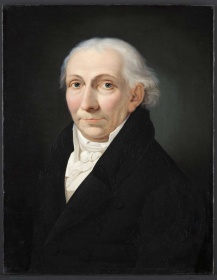 Johann Valentin Prehn (1749–1821) holds a special place among art collectors in Frankfurt/Main: as a confectioner he belonged to the class of craftsmen and not, as most other collectors, to the bourgeois elite or moneyed aristocracy of the city. His widely renowned store in one of the best locations on the Zeil apparently produced enough profit between 1780 and 1821 for him to afford acquiring an old-style universal collection. In addition to the over 300 large format paintings and a cabinet of smaller format pictures, the collection also contained drawings, graphic works, sculptures, natural objects, Roman antiques, ethnological objects, crafted art, coins and curiosities.

Our information about the contents of the universal collection derives from the extensive auction catalogue of 1829. The inheritors of the collection, merchant Ernst Friedrich Carl Prehn (1781–1834), confectioner Johann Friedrich Prehn (1778–1848) und the pharmacist’s wife Johanna Rosina Sänger, born Prehn (1785–1865), auctioned off almost all collection objects in 1829 with the exception of a few large format paintings and the small format art gallery, now at the historisches museum frankfurt. The stuffed birds, minerals and ethnological objects from South America had previously already been given over to the “Senckenberg Natural Museum”.